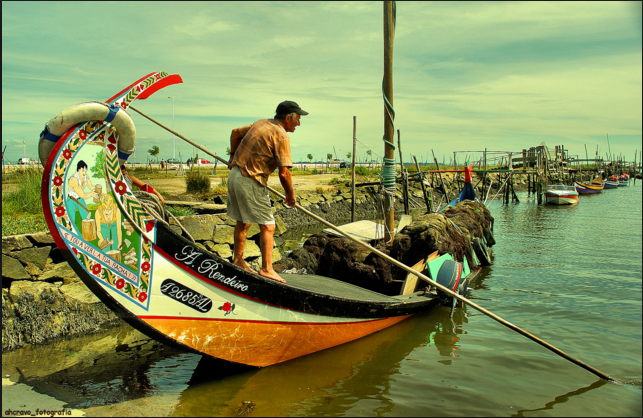 From a young age, my grandfather began working on the river in Aveiro, Portugal, on the “moliceiros” (traditional boats from Aveiro, known for their bold colours and humorous decorations that poke fun at everyday situations (1)).  On this boat, his tasks varied from fishing to transporting commodities such as salt and/or hay (traditionally, moliceiros were used to transfer the seaweed harvest, which was the main source of fertilizer for Aveiro’s farmland (1)). Alongside his father, he learned all the tricks of the trade by age 11.  Having endured and persevered through tough working situations on the boat at such a young age, my grandfather grew to become very passionate and dedicated towards his work on the river. As he became older, his family grew from two to five people, ultimately giving him the motivation to find a better life for his children by immigrating to Canada. Leaving behind his work and greatest passion was one of the toughest decisions my grandfather had to make.

However, shortly after he retired, he returned to Aveiro and bought his own moliceiro. Today, he uses it less as a means to transport commodities, and instead provides tours of the river’s canals to people visiting Aveiro (fun fact: Aveiro is sometimes referred to as the “Portuguese Venice”, due to the these canals and the bridges built over them (1))

. His moliceiro is what allows him to maintain his inner youthfulness, as well as helps him relive the memories of his childhood. He still competes in races and painting contests along the river to this day, almost always placing first. Documentaries have even been made about him, because he is one of the hardest working, passionate and accomplished men anyone can encounter. His trophies and medals are endless, but in his eyes his family is his greatest accomplishment.

Whenever he comes to visit us in Canada, he speaks of his boat and how much he misses it. While one may think that after retirement passions such as these fade, I believe otherwise. His passion, each and every year grows stronger and stronger.

My grandfather is the greatest inspiration in our family. His hard work and dedication have never faded over the years. Thank you Avô, for showing us what passion really looks like.

Maria Celeste Freitas was born on Madeira Island in 1926. Her husband, Jordão Isidro de Freitas came to Canada as...